For 2019, the Lakes Charity Classic was held at the Grasmere Sports Showground in the centre of the Lake District. The event was held on a Saturday and Sunday with the possibility of a low key competition on the Friday/Monday

Although Friday was not a competition day, conditions were excellent. John Westall showed what could be achieved by taking off from Alcock Tarn, above Grasmere, and flying to Rillington in the Vale of Pickering! He took off at 11:45 and landed at 17:48. His big problem was that he had to get back in order to compete in the LCC. Everyone else had some good flying around Grasmere, flying until late.

On Saturday, the A and B competitions went to Blease Fell on Blencathra and the coaching group went to Jenkin Hill.

Sunday started with very calm conditions but with a forecast of strengthening south easterly winds later. The A and B comps set off for Coniston; by the time take off was reached, the wind was too strong and the competition was cancelled. On return to Grasmere, we had an entertaining ground handling race to complete the competition.

Many thanks to Grasmere Showground for all their help and assistance over the weekend.

2019 smashed our records for donations to charity with a record £5,460. Many thanks to everyone who helped us reach this amount.

Beneficiaries of the 2019 Lakes Charity Classic were

The task setters for the A competition were Mike Cavanagh and Richard Bungay.

For the A comp we were considering the Langdales or Seat Sandal as a starting point, with a big transition, flying on to the Blencathra, Skiddaw range to extend the distance before heading out to Southwaite services on the M6, hopefully aided by sea breeze convergence.

The spreadout at the start of the day made it look like the big transition would put too many on the ground so we skipped it by starting on Blease. Conditions on Blease were pretty much as expected and the task was called directing the pilots to fly along to Scales Fell, then back to takeoff area and out to just past the A66, off to Scales again and then back again west to just past the spur coming down from Carlside, then tagging Scales for last time before heading out to Southwaite services.

At the briefing conditions were quite light which saw the keener pilots heading further up the slope to gain any benefit they could, but such action was not needed as the normal takeoff area was soon quite breezy.

An elapsed time format was utilised to take as much pressure of the pilots as possible.

I was a bit surprised to see pilots heading back from Scales so low, it looked like keeping high towards the back ridge was easier, although with the risk of stronger winds. As predicted the wind went off to the west as the day progressed.

Bud Paterson was one of the pilots who landed after a while back at takeoff as was having trouble getting his head around the task. Once he had it clear, although it seemed like he would then be playing catch up, as it was elapsed time he then stormed around the task, and almost took the win.

Ian Miskin was the winner and here is his track log 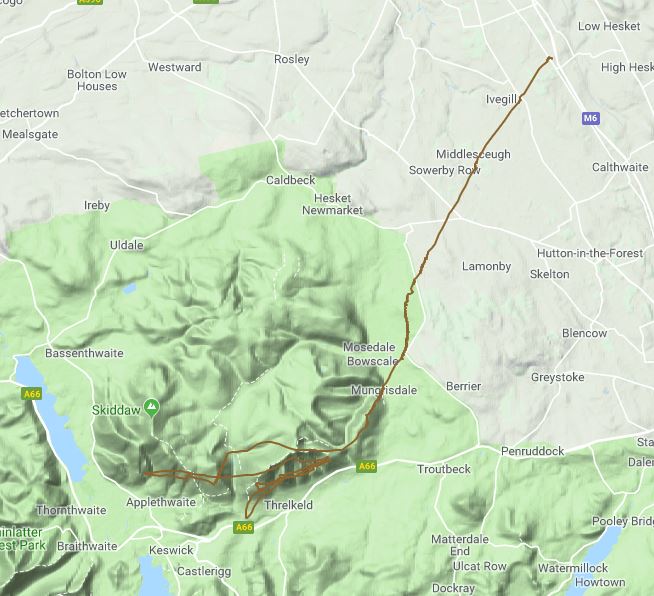 On Sunday the A comp had a walking circuit of the slate quarry on Coniston Old man before calling it a day for those pilots with a bit of metal to have a head to head at groundhandling and beer slurping.

You can view an animation of the 3 winners flights by following this link.

The task setters for the B competition were Ben Keayes and Phil Kew.

Cumbria Soaring Club would like to thank all of its sponsors and supporting organisations. Their generosity helps make the LCC a great event!

Sick and the Wrong