I had a very enjoyable flight last weekend and thought I'd just share it. Techno's can look away now.

For a while I'd wanted to cross the centre of the Lakes on an out and return to the west (Irish sea) coast. It's about 45 mile, but very scenic over the mountains with the final, coastal plain subject to strong sea breezes, especially when the best conditions occur. It's about at the max. range of a 5 ltr tank, so takes few errors to fall short. Good thermal conditions can help, but also hinder if they get really snotty .. which they are prone to do through the convergence zone.

I deliberately left it late; about 3pm to take off from our usual field in the Lyth valley, near Kendal. After battling rough and rowdy air for 30 minutes and making only slow progress, I thought seriously about turning back. The heavy sink required too much high power engine use; I struggled to gain height in the broken thermals/heavy sink and the mountains were now looming. I felt sure at this rate of progress and fuel use I'd never make it. During the roughest thermals I followed the now usual practice of lowering the legs to prevent possible side wire hang-up's. I have side wire tubes fitted, but with wheels it's still possible to snag a leg/wheel. The foot throttle is also a real boon for thermal flying and allows easy control to suit the moment; hand throttle use seems quite impractical.

Over Esthwaite Water, south of Hawkshead I was still only 1000' agl and being bounced around, but finally got a decent thermal to lift me into the Langdale valley.

From this point on the air smoothed considerably and my climb became a steady 2 up to 3000 agl. I took a direct path over Pavey Ark and Glaramara and headed for the NW fells. They are of a different structure to the central fells being just as big, but more rounded and less rugged. They were crossed easily but I now expected a strong NW sea breeze for the final 15 miles to Maryport on the coast. I passed over a paraglider soaring Swinside and watching him suggested a more WSW flow which would help considerably.

I continued with a fair ground speed averaging 26 on the gps but unable to see the fuel level despite contortions I adopted a fly til it stopped attitude. But the motor just kept running smoothly as I kept gently backing off the power and very slowly loosing height as the coast became clearer and Cockermouth slipped below and soon the outskirts of Maryport. Feeling very satisfied I select a field that looked the least lived in and landed into a stiff breeze and an upslope. This was not going to be the easiest to get out of and I was wishing I'd been more careful. One surprise, on checking the fuel tank I found I still had almost 2 lts remaining.. I could hardly believe it.

One hour and a few adventures with some odd locals later I'd managed to get fuelled up.

It was now 7pm, the stiff sea breeze didn't seem to have died any but I'd found 40 yds of side sloping field leading to a fence. Take off actually proved very easy; three paces in the breeze and I turned out over a shallow valley. After I'd settled and plotted a course I began to notice a slight change in engine noise; perhaps it was my imagination but I had visions of an out-landing and a long night. This would be a major problem as I'd to be up for work at 4:45 the next morning. However, despite the seeming drop in revs the climb rate was good and soon to get better. Maybe fuel, unfiltered from the pump was the cause ... lesson there perhaps.

Approaching the mountains again the air, which was now silky smooth became wonderfully buoyant .. with little motor help I climbed easily to 6500'. The view were stunning, something flatlanders rarely experience. To the west the summits were still in sun but below the valleys were filling with wispy fronds of mist and growing darker. As I drifted along with the gps counting down the miles it truly was the best possible place to be.

Finally, I landed at 8:30pm with an empty tank .. that surprised me too as I seemed to have a very frugal, easy ride back .. wonder why?

OK, just a simple flight .. but I thought I'd get it off my chest and share it. 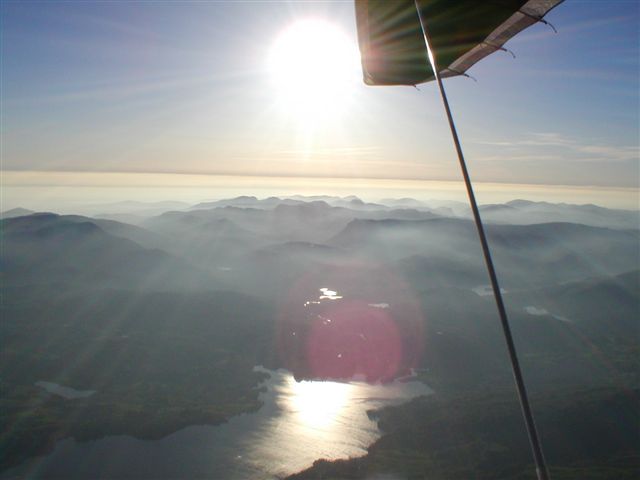 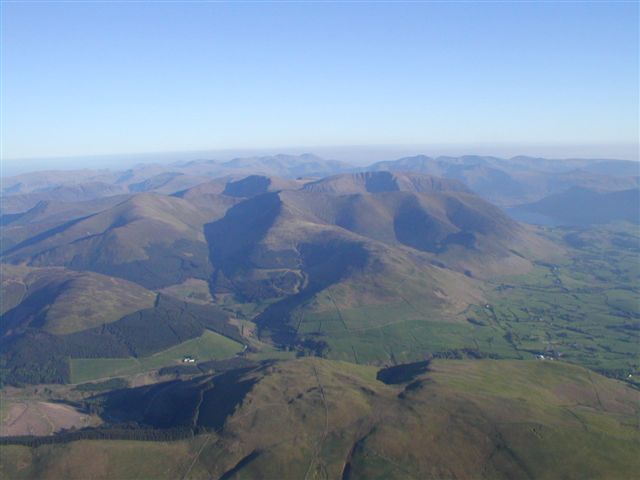